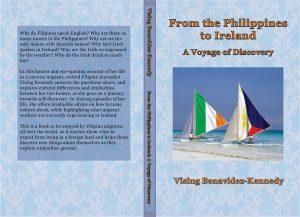 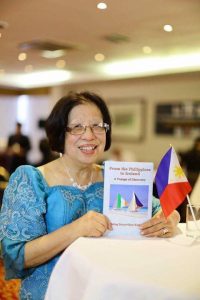 The Philippine Honorary Consulate Dublin and the European Network of Filipino Diaspora (ENFiD)-Ireland launched the first book of its kind, “From the Philippines to Ireland: A Voyage of Discovery,” at a special Philippine Independence Day Celebration held at Ballsbridge Hotel Dublin on the 2nd of June 2017 from 6 pm.

The book, which is about the life of Filipino immigrant and former journalist Vising Benavidez- Kennedy as she explores her two homes, was officially inaugurated by Philippine Honorary Consul to Ireland, Mark Christopher Congdon.  The honest and eye-opening account brings new light on how to tame culture shock through a journey of self-maturation and self-discovery. It reveals what many migrant workers currently experience in the Republic of Ireland, but also highlights the similarities between the Filipino and Irish culture. It is a book to be enjoyed by migrants all over the world as it equips readers with some guidance on what to expect and helps them discover new things about themselves as they explore unfamiliar ground.

“May the commemoration of our country’s Declaration of Independence inspire you to build a community . . . that embodies a deep love for their homeland.” This and the Philippine government’s efforts on eliminating crime and drugs are the main points that attendees of the event heard from Philippine President Rodrigo Duterte’s letter.

Philippine Embassy London First Secretary and Consul Mr Voltaire Mauricio delivered a message on behalf of the newly appointed Non-Resident Philippine Ambassador to Ireland, Mr Antonio Lagdameo, a Davaoeño like the President. Honorary Consul Congdon, along with First Secretary and Consul Mauricio, was introduced to Filipino community organisations, who, in return, presented issues and concerns affecting over 13,000 Filipinos in Ireland.

Sancha Magat of Migrant Rights Centre Ireland (MRCI) spoke of the origins of her group’s work which started mainly with the Filipino community, and drew attention to its campaigns with workers.

Cynthia Barker, the first Filipino to be elected Borough Councillor in the UK and 2016 Recipient of the British Honours Award endorsed by Her Majesty the Queen, attended the event.

Also present was 2017 Emerging Scholar Awardee Diane Nititham who talked about “Making Home in Diasporic Communities”. Based on original ethnographic work conducted in Ireland and the Philippines, the book examines how Filipina diasporans socially and symbolically create a sense of ‘home’.

Carmen Legarda, the first Filipino-origin to run for the Houses of Parliament in England and selected to be the Parliamentary Candidate for the Hendon constituency by the Green Party for the June 8th British Elections was also there.

The event was covered by international media including UNTV and ABS-CBN.  Here is a link to the TV coverage by UNTV.

Vising Kennedy has an article on the Metro Eireann, the first and only weekly multicultural newspaper in Ireland. She was also interviewed on June 18 by Teresa Quinn in her radio programme called “Bookline” on Liffey Sound 96.4 FM, a community radio station serving Lucan and its Environs.  Here is her live  interview. The book is available on Amazon and Createspace.com.  You can also DOWNLOAD FOR FREE.

For more info on the first Filipino-Irish book of its kind, please go to the Voyage Facebook Page.

3,307 thoughts on “From the Philippines to Ireland: A Voyage of Discovery”