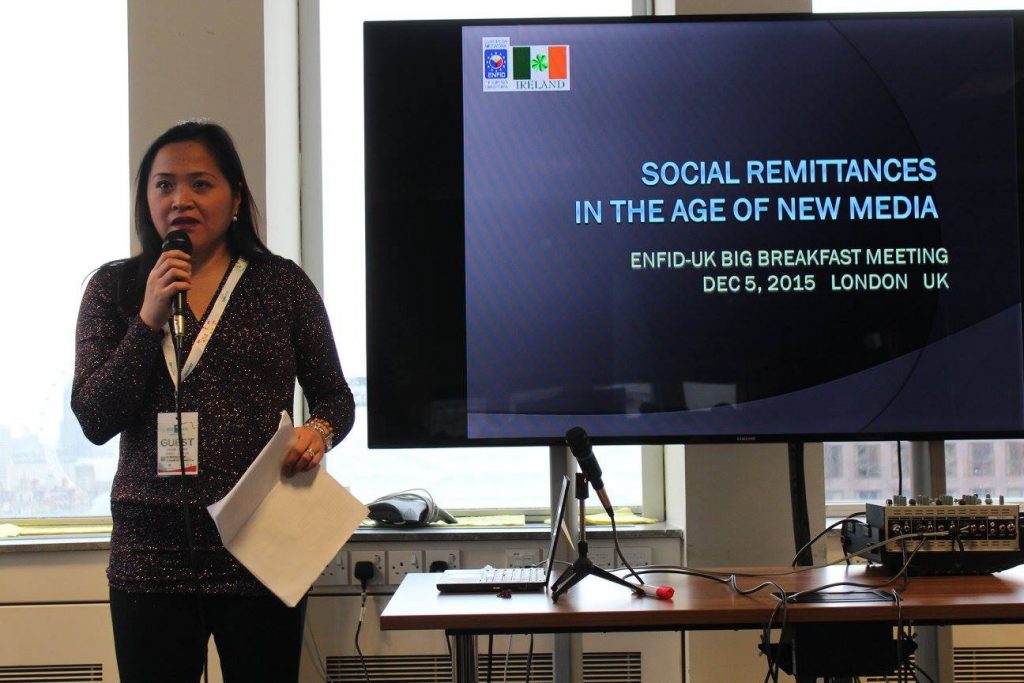 Vanda Brady gave a talk on Social Remittances in the Age of New Media at the ENFiD-UK Breakfast Meeting in London on December 2016.  She presented the importance of having access to the internet to address social, political and economic issues. As an example, she cited the plight of Jayson Montenegro, an undocumented Filipino in Ireland and how he used his accounts in Twitter and other online facilities to get the attention of all concerned and gain support for his cause and that of others similarly situated.

Digital art is an artistic work or practice that uses digital technology as an essential part of the creative or presentation process.

Migrants bring with them ideas and experiences that shape their encounters with their host societies.  These ideas and experiences strongly influence who and what they are exposed to and interact with in the countries where they settle.  These circumstances then affect the social remittances they send back through various channels, including New Media, or any content available on-demand through the Internet, accessible on any digital device, such as online newspapers, company websites, e-books, and social media.

Jayson Motenegro made history by declaring his illegal status in front of hundreds of people at the United Nations Day for the Eradication of Poverty in Dublin in October 17, 2010. He also put his name on Government Record to the Justice Committee on February 25, 2015 to fight for the legalisation of undocumented migrants in the country. He has since been the founding member of Justice for the Undocumented (JFU) campaign group which the Migrant Rights Centre Ireland (MRCI) established in line with its regularisation proposal for the growing numbers of undocumented persons. JFU now has 1400 undocumented members and is supported by over 40 organisations across civil society and the business sector and is campaigning for the introduction of a regularisation scheme which would allow over 20,000 undocumented migrants – majority of which are Filipinos (33%) – the chance to come forward and regularise their situation. A poll conducted in June 2015 showed that the majority or 67% of the Irish public is in favour of allowing undocumented migrants the right to live and work legally or of providing irregular workers a route back into the system.  Jayson was awarded the Justice Gala Activism Award on November 14, 2015 for his exemplary work as the spokesperson for JFU.

Jayson is an undocumented or irregular worker in Ireland that has committed an administrative infringement rather than a criminal offence. He continues to sacrifice and persevere for the good of his family and his fellow undocumented migrants, who, for many years, long for acceptance and respect from the Irish community. He attended numerous events, vigils, marches, newspaper and radio interviews, and conferences. His remarkable story can be found in 10 company websites, and 5 online newspapers.  He was heard in 2 radio stations, seen in 1 TV network and in countless You Tube videos, tweets, and Facebook pages.  Clearly, he is a perfect portrayal that centuries-old habits of moving abroad for a better life can sometimes be misleading.  That happiness and contentment is what you make of it, whether it be in the Philippines or abroad.  That a Filipino migrant should build on that happiness and contentment by developing the right attitude, behavior and mind-set, because all of these will be reflected to your families and friends back home and your host country, as you share your life to the digital world. Whether or not his wish to be home this Christmas will be granted, he has found his own self-constructed peace as the voice of undocumented migrants, a voice that family and friends can be proud of as they witness his good work anytime, anywhere – with a touch of a button.

4,366 thoughts on “Social Remittances in the Age of Digital Media: Jayson’s Tale of Two Worlds”